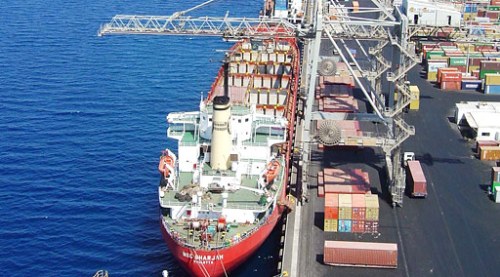 Manama: Under the patronage of the President of Customs, Shaikh Mohammed Bin Khalifa Bin Ali Al-Khalifa, the Customs Affairs held a graduation ceremony the other day for the third foundational customs course for military personnel for the year 2013.
Marking the occasion, the President of the Customs expressed his thanks and appreciation for the efforts of all trainers in training the new staff and rehabilitating them to work in the customs.
Shaikh Mohammed also congratulated the graduates and urged them to exert their utmost efforts in serving their homeland, its security and stability, wishing them more success and progress in their careers for the interest of Kingdom of Bahrain, asserting that the outcomes of the training programme were fruitful, and consistent with the strategic plan adopted by the Customs Affairs in developing the human cadres.
The President of the Customs highlighted that the course which included the participation of 63 new staff, included explanation of the value of customs, the risk management, the intellectual property rights, the body language, and procedures for customs inspection, in addition to the field visits to the work sites at the customs exists, that work in turn on the preparation and the creation of new staff to engage in customs work.
At the end of the ceremony, Shaikh Mohammed honoured the outstanding and distributed certificates among them, in addition to honouring the training committee supervising the training, in recognition of their pioneering role in the distinctive preparation of the new staff, and their efforts in developing the training and practical programmes.

DUSHANBE: The World Customs Organisation (WCO) organised a three-day workshop recently in Dushanbe, on the customs value for the officials of the customs service of Tajikistan. All expenses for the seminar (experts’ travel and accommodation) were covered by the Europe Regional Office for Capacity Building in Baku.

Mr. Leonardo Macedo from the WCO Secretariat and Ms. Lissette Nonalaya Aranda from WTO Geneva-based Institute for Training and Technical Co-operation participated in the workshop. From the participants’ side, the seminar was attended by about 30 officials from customs service of Tajikistan.

Participants expressed their interest for further cooperation in the use of tools of the WCO and WTO in the process of customs administration.

The match was supervised by Tassaduq Jaffery and Muhammad Arshad of Sindh Police while Ajmal Pasha, Sagheer Hussain and Azeem Khan acted as jury members in the match.

Customs XI won the match by 4-3 and the chief guests distributed prizes among the winner and runner-up teams.

A large number of disciplined spectators came to enjoy the friendly hockey match between International XI and Customs XI.

The Customs officials were of the view that Pakistan Customs by organising such a well-managed friendly hockey match has retained its tradition since 1916.

DUBAI: Dubai Customs in collaboration with Dubai Government Excellence Programme (DGEP) Secretariat General organized two introductory workshops on the categories of both electronically and financially distinguished Government Departments as part of DGEP categories and for which the nomination submission will be made in January 2014.

Mr. Juma Al Gaith, Executive Director of Customs Development Division at Dubai Customs began with saying that “ we are delighted to welcome DGEP Secretariat General advisors to Dubai Customs and appreciate their cooperation in delivering two workshops on the categories of both electronically and financially distinguished government departments”.

“After having won the first place under the category of the distinguished technological/technical project for two consecutive years that is in 2011 for the Business To Government Channel (B2G) and in 2012 for Risk Engine project, we are making every effort to progress and maintain top places within such category and other categories as well,” said Al Gaith. “Dubai Customs is keen at all times to improve its service delivery standards for facilitating customs business procedures in such a way that will achieve customers’` satisfaction and ensure a value-added to them,” he added. The workshops were facilitated by Dr. Ziad Al Kahlout, the Quality and Excellence Advisor and Mr. Osama Hammad, Senior Advisor from DGEP Secretariat General. While opening the workshops, Dr. Al Kahlout spoke about DGEP and the most important developments and categories that have been created within DGEP. Dr. Al Kahlout then delivered a working paper on the financially distinguished government department reviewing the most important submission requirements for such category and its criteria, which refers to any government department or administration found to be distinguished in financial resources management, observes rationalization of expenses and committed to the budget and generation of revenue.