KARACHI: A commission, established by the Apex Court, has found no proof of arms smuggling from Karachi port.

The Supreme Court set up the commission headed by former Member Customs Ramzan Bhatti to probe into the matter of disappearance of Nato weapon shipments from Karachi port after the director general Rangers had told the court on August 30 that around 19,000 containers, loaded with weapons and vehicles, had gone missing during the tenure of a former minister for ports and shipping.

The commission, in its 15-page report, told the Supreme Court that the DG Rangers did not give any evidence to substantiate his claim. The sources said that most of the disappeared containers were loaded with goods for Afghan transit trade and just a few hundred containers linked to Nato.

The commission also rejected any impression that the investigation was influenced by the US embassy. Earlier, US official, in a statement, also denied that any Nato containers had gone missing from the Karachi port.

Sources further told that an Assistant Collector Mukhtiar Shaikh and a principal appraiser acted as a bridge between Customs Department and Customs agents in order to hold discussions.

The bar, in a letter, has urged Federal Board of Revenue (FBR) Chairman Tariq Bajwa to rectify the illegal practice as rejecting income tax return without wealth statement is not permissible under the law.

PTBA President Munawwar Husaain Shaikh informed Tariq Bajwa that the income tax return couldn’t be filed on the automated system of the Pakistan Revenue Automated Pvt. Ltd (PRAL) without the prior submission of the wealth statement and settlement of Income Support Levy (ISL).

The bar said that the taxpayers had been demanding simplification of tax returns but regrettably it was not made in the new draft return. The bar also highlighted issues regarding correction in the draft income tax return including marginal relief, depreciation in Annexure A, and option of presumptive tax regime. 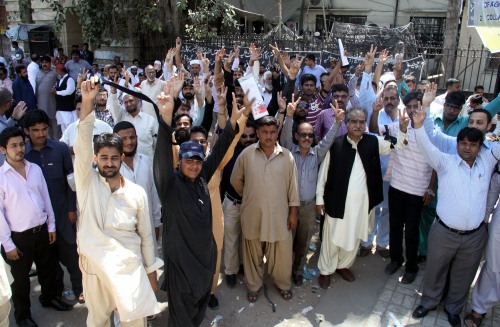 KARACHI: The Karachi Customs Agents Association (KCAA) continued their strike for second day on Wednesday against the issuance of around 1178 Order-in-Original (ONOs) to the Customs agents in Afghan Transit Trade (ATT) scam.

During the strike, the Customs agents under the supervision of KCAA President Saifullah Khan gathered outside the Customs House Karachi and chanted slogans against Pakistan Customs. They tied black armbands during the protest. The transporters bodies including Karachi Goods Transport Association, United Goods Transport Association and others also announced their unconditional support to the strike.

It may be mentioned here that the office-bearers of All Pakistan Customs Agents Association (APCAA) were not seen in the gathering.

Some unpleasant scenes were also witnessed outside the Customs House when Customs agents tried to restrict some of the importers from filing their GDs on self-clearance basis despite the presence of Rangers and police.

It is pertinent to mention here that President KCAA Saifullah Khan during his press conference on September 6 had clearly announced that any importer can file his GD on the basis of self-clearance, but unfortunately, Customs agents forcefully restricted the importers to file GDs.

Meanwhile, Collector Model Customs Collectorate (MCC) West Muhammad Saleem during a press briefing at his office said that the doors are wide open for discussions with Customs agents.

Giving details, the Collector MCC-West said that total 918 GDs have been filed till afternoon despite the strike, adding that routine activities remained continued at all ports.

“Customs agents have legitimate right to submit an appeal against issuance of ONOs and the Pakistan Customs will give an opportunity to them for hearing their multiple show-cause notices in a single day”, he added.

On the occasion, Collector MCC-West urged the Customs agents to adopt the way of discussions, adding that the officials of Pakistan Customs have clear directives from FBR chief Tariq Bajwa to listen to the issues of Customs agents with appropriate evidences and decide such issues on merit.

“We would follow the law and directives of FBR high officials. Pakistan Customs has taken up all important issues for redressal and sent a detailed report to the FBR chief in this regard”, Collector MCC-West added.

When contacted, Chief Collector Appraisement Nasir Masroor Ahmed termed the strike of Customs agents as “illegal act” and said that they should register their protests with Collector Appeals. Being license holders of Pakistan Customs, they should not indulge themselves in such illegal acts (strikes).

“They are violating the laws and rules of Pakistan Customs and their strikes do not even affect revenue generation, but the importers may be affected from the strike of Customs agents, as they have to pay demurrage/detention charges due to late clearance of goods from terminals”, he added.

“The Pakistan Customs have called officials of Law Enforcing Agencies (LEAs) including Rangers and police in order to avoid any untoward incident during the strike, adding that if any Customs agents want to continue their routine practice to file GDs, the Customs Department will provide them appropriate security in this regard”, Chief Collector MCC Appraisement asserted.

KARACHI: The Federal Board of Revenue (FBR) has finalised process to rationalise the statutory regulatory orders (SROs) regime as per the International Monetary Fund’s (IMF) conditions on new loan programme, and will announce it by the end of 2013.

According to the sources, the exemptions and concessions will be rationalised and such facilities will be given to only export-oriented industries. They said, “The concessions will not be eliminated completely and the export-oriented sectors will be facilitated with these services because the manufacturing activities have already been disturbed owing to the power crisis and poor law & order situation.”

It is pertinent to mention that the revenue loss owing to exemptions or concessions has increased to Rs239.53b in the fiscal year 2012-13 as compared to previous fiscal year’s tax loss of Rs205.92b. During the last fiscal year, the tax losses through SRO regime had reached Rs37.43 billion level in sales tax and Rs119.7 billion in the customs duties.

The sources also disclosed that the partly removal of SROs was one of the conditions of the IMF on fresh bailout package through which Pakistan would get $6.64 billion. They added that the International Monetary Fund had been given assurance of eliminating SROs, which would be announced by the end of December this year.

The PSMA members said that hike in power tariffs had further widened the price difference between steel products and other production created by the ship-breaking industry.

Amreli Steels Chief Executive Abbas Akberali said that the rise in electricity prices had also increased the rate of steel by at least Rs5,000 per tonne. He urged the government to impose an FED of at least Rs10,000 per tonne on ship-breaking products to cut down the price difference.

The current price of shredded scrap from smelters is Rs69,645 per tonne, as compared with the ship-breaking industry’s billets of Rs54,509 per tonne – a difference of Rs15,136 per tonne.

Customs Today
Create a free website or blog at WordPress.com.